Discover the Biblical Feast of Passover/Pesach which today many Christians call it Last Super. It is the Passover Seder!

What is a Seder?

The Passover Seder (pronounced: say•dur) is a ritual feast that marks the beginning of the Jewish holiday of Passover. It is conducted throughout the world on the eve of the 15th day of Nisan on the Hebrew calendar, generally in March or April for us here in the states.

Over the past 3,000 years, Passover has endured as the most celebrated and widely observed holiday in the Jewish tradition. The Passover holiday commemorates the seminal event in Jewish history — the story of the Exodus which led to the birth of the Jewish nation, Israel. In addition, the most basic and fundamental principles found in Judaism — faith, prayer, deliverance, freedom, and service to God — are woven into this timeless story.

It is one of the foundational stories in the Hebrew Bible (which Christians know as the Old Testament) — Moses leading God’s people out of Egypt, away from Pharaoh and out of slavery. The suffering of the children of Israel and their deliverance from slavery reaffirms our faith that God protects, provides for, and deeply loves His people and that He hears our prayers.

The command to observe Passover is found in Exodus 12 which reads:

The LORD said to Moses and Aaron in Egypt, “This month is to be for you the first month, the first month of your year. Tell the whole community of Israel that on the tenth day of this month each man is to take a lamb for his family, one for each household… That same night they are to eat the meat roasted over the fire, along with bitter herbs, and bread made without yeast… Eat it in haste; it is the LORD’s Passover.” (Exodus 12:1-3, 8, 11)

Once a year, Jews devote an entire week to recalling the events of the Exodus, internalizing these messages, and growing in their faith. One way they do this is through the ritual Passover meal known as the seder, which is the heart of the Passover celebration. At the seder meal, the Haggadah is read. This is the text that has been used for all of these generations to guide the seder, saying: “For God did not redeem our ancestors alone, but us, as well.”

What Is the Seder Plate?

The most visible part of the seder dinner is the plate of food eaten by those in attendance. The foods eaten at the seder all symbolize different parts of the Israelites’ escape from Egypt.

One of the first steps Jews take to begin the seder, after the opening blessing and ritual hand-washing, is to dip vegetables into saltwater. Any vegetable can be used for this symbol known as karpas, but it is customary to choose something green such as parsley, celery, or cucumber. The saltwater recalls the Israelites’ sweat and tears shed in slavery under Egyptian oppression. But the karpas also symbolizes spring, which is when God redeemed the children of Israel and when Passover is celebrated. 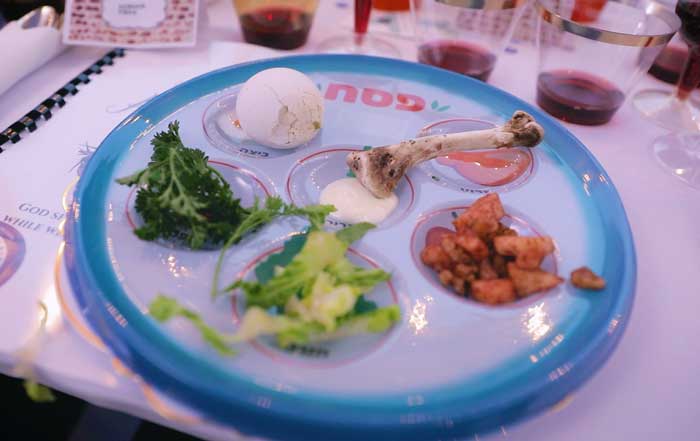 Zeroah is a piece of roasted lamb meat that reminds Jews of the lamb God told the Israelites to prepare the night before they were freed from slavery. It also reminds Jews that during the plague of the firstborn, God passed over the houses of the Israelites who had placed the blood of a slaughtered lamb on their doorposts. Finally, the roasted bone encourages Jews to remember that just as God saved the Israelites thousands of years ago, He can do the same for us today.

The beitza, or egg, which is boiled and then roasted, represents a second offering that was brought during Temple times. In Judaism, an egg symbolizes mourning and is the traditional food of mourners. On Passover night, Jews remember that they still mourn the loss of the Holy Temple and that they yearn for the time when the Third Temple will be built. And while an egg recalls mourning, it also is a symbol of birth, another theme of Passover. It is through the slavery in Egypt and the subsequent redemption that the nation of Israel was born.

Maror (bitter herbs) and hazeret (bitter vegetables), which can be substituted with horseradish and romaine lettuce, remind Jews of the Israelites’ bitter lives as Pharaoh’s slaves. On this night when Jews celebrate their physical and spiritual freedom, they remember that the things people usually become enslaved to — temptations, addictions, or other vices — often start off innocuously before becoming enslaving and self-defeating. They remember how bitter slavery is — whether physical, emotional, or spiritual — and thank God for helping them achieve full freedom.

Haroset — a mixture of apples, nuts, and grape juice — reminds Jews of the mixture that the Israelite slaves used to make bricks for Pharaoh, and of the hard work the slaves were forced to do. However, even though the haroset recalls the bitterness of slavery, it tastes sweet, showing that even in bitter times, we can always find something sweet in our lives, and that bitter times are eventually followed by the sweetness of redemption.

One element on the seder table, however, stands out among the rest as a deeply symbolic and integral component of the Passover observance. That item is matzah (also spelled “matzo” or “matza”) — the flat, cracker-like bread that Scripture refers to as “unleavened bread” (Deuteronomy 16:3).

Jews are commanded to eat matzah for the entire duration of Passover, seven days in Israel and eight days outside the Holy Land. It is the only form of bread they may eat throughout the week-long holiday. The Bible says, “For seven days no yeast is to be found in your houses” (Exodus 12:19). Thus, the days just prior to Passover are a flurry of activity as Jews around the world clean their houses, searching for leavened products in every nook and cranny.

Although comprised of the simplest of ingredients, matzah is a multidimensional element with layers of meaning. It most powerfully captures the symbolism of the Passover story by representing both slavery and redemption in the Exodus narrative.

The Message of Matzah

Matzah is known by several different names, and each speaks to a different aspect of its meaning. The Bible refers to matzah as “the bread of affliction” (Deuteronomy 16:3). It is also dubbed “the poor man’s bread,” as it is made up of only two ingredients — water and flour. It contains only the bare basics, signifying a life of poverty and difficulty. Through it, Jews can taste the harsh slavery of Egypt.

However, matzah is also referred to as “the bread of freedom.” It was the byproduct of God’s swift and miraculous salvation when the children of Israel were brought out of Egypt in such a hurry that they didn’t have time to allow their dough to rise. Matzah, therefore, is a symbol of Jewish freedom as well.

Matzah became known as such a powerful symbol of Jewish identity that there have been times in history when making and consuming it has put Jews at risk. In the former Soviet Union, for example, the Communist regime waged war against organized religion and at times banned the making of matzah outright. Even during the times it was technically legal, it was never really safe, and thus was usually done in secret.

The ‘Food of Faith’

Matzah is also called “the food of faith.” This title links the other two names and also encapsulates the message of the Passover seder. It takes faith to see our afflictions as a precursor to redemption. Matzah is the link between slavery and freedom, reminding us that God hears our prayers and brings about redemption.

In life, we tend to separate our good times and our bad times. We have dry seasons and seasons of abundance. We don’t like the trying times in our lives, and we long for the more comfortable, blessed times.

But the truth is, as matzah teaches us, that it’s all part of our God-given blessings. Like two sides of the same coin, adversity in our lives is what often leads to our greatest victories. Appropriately, matzah is the last thing eaten at the seder meal, because Jews want the taste — and its message — to linger long after Passover has concluded.

Finally, in Judaism, matzah represents humility. It is low and flat like a humble person. In addition, it is simple, consisting of just flour and water; not at all fancy like many tasty and decorated leavened products. Chametz, leavened bread, on the other hand, represents arrogance. Bread is all puffed up and full of itself.

Eating unleavened bread, the bread of humility, for an entire week reminds Jews of their true place in the world. For all of humanity’s achievements and talents, we must remain humble, recognizing that everything is a gift from God. Whether you are Jewish or Christian, this is a lesson worth remembering — again and again.

The Seder Meal in the Christian Bible

Some of the Jewish Passover rituals have carried over to the Christian holy days of Good Friday and Easter. Many of the aspects of communion or the Lord’s Supper are also taken from the Passover tradition. And just as we’ve learned how the seder meal holds symbolic significance for the Jewish people, the Last Supper does the same for Christians. With the items on the plate holding deep meaning and promising deliverance and salvation, just as God did for the Israelites, there is a direct connection between the two.

Jesus regularly observed the ceremonies of Passover by going to Jerusalem to celebrate this festival with his disciples.  It was during the Passover celebration that Jesus taught his followers the significance of his approaching death and the season known to Christians worldwide as Easter (Luke 22: 1-20).

Jesus underscored the importance of Passover to him as a Jew when he told his disciples,  “I have eagerly desired to eat this Passover with you before I suffer” (v. 15).

And beyond the connection between the seder of the Jewish people and the communion of Christians, beyond our two faiths’ shared promise of deliverance, the seder can also remind Christians of the Exodus still going on, that of biblical prophecy being fulfilled. God promised in Isaiah that He would “assemble the outcasts of Israel, and gather together the dispersed of Judah from the four corners of the earth” (11:12 KJV).

And even today, with the help of Christians around the world, God’s people — the Jewish people — are making an exodus. They are returning to their biblical and historic homeland, just as they did as they escaped Egypt, making aliyah (immigrating) to Israel, the only Jewish state.

Let us host your next Seder

Spread The Gospel and Change Lives

The Blue Line Angels Church is a Nonprofit Organization which started out solely focused on women either in, or connected to; police, firefighter, and military fields. After realizing the greater need in the community, the group expanded to include all God’s children who share the same love for Jesus.